J is for James Dean 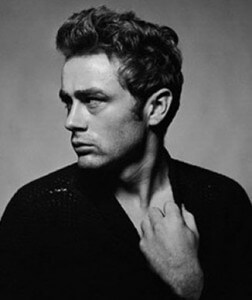 I was sixteen years old and I was miserable. I was flunking in all my high-school classes, my mother and I had a horribly abusive relationship, I saw my father only on the weekends if that…and I hated myself. I had heard about James Dean, but had never seen any of his work. One night, the movie “Rebel Without A Cause” came on and I casually decided to watch it. From the minute I saw James Dean, I fell in love with him as only a teen-age girl can do. Here was a character who felt unloved and unseen by his parents just like me. He was also an outcast at his high-school which I completely understood. What I didn’t understand though was how could anyone not fall in love with a character like “Jim”. That was the first time that James Dean touched me with his magic.

As I watched the movie further, I realized that Jim represented all the loneliness, angst, and anger that teenagers either flaunt or hide. He was the anththesis  of the shiny smile-y, white-bread teenager that was hailed in the 1950′s. Jim didn’t care about how he appeared and couldn’t hide the pain that he wore like a cloak. When Jim meets “Judy” (played by Natalie Wood), who is  one of the most popular girls at his school, he reaches out to her because he knows that deep inside they are the same. James Dean electrified me every minute and I surrendered to the ride. I knew that somehow in someway; something  horrible was going to happen and I couldn’t bear to see Jim, my hero, suffer in any way. And yet, as if hypnotized I couldn’t  stop watching the movie.  I became Jim and saw everything through his eyes. While I liked Natalie Wood and her character I wasn’t drawn to her the way I was with both Jim the character and James Dean the actor.

Inevitably, the movie does end in a tragedy with one of the main characters dying and those who  lived were left with their souls battered and bruised. The movie was nominated for three Oscars and James Dean became the archetypal antihero to adolescents everywhere.  Dean died at the age of twenty four in a car crash killing him instantly. He only had three major roles in the movies “East of Eden,” “Rebel Without a Cause” and “Giant” which was his last film. One of Dean’s famous quotes was; “Dream as if you’ll live forever, live as if you’ll die today, proving that he was almost too beautiful to remain here long. I wish I could tell him that watching him in “Rebel Without a Cause” helped me survive the pain and darkness when I most needed it most. “J” IS for James Dean….

The video below highlights some of Dean’s greatest moments in the movie “Rebel Without a Cause”. It doesn’t matter if you’ve seen the movie or not, I think you’ll appreciate the gift he left behind.