K is for Kinsey Millhone 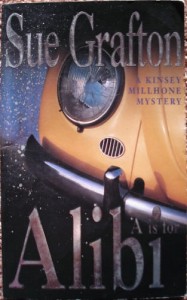 When I was 20 I became love sick.  I was dumped by my boyfriend and I pined my life away.  I caught ton­sil­li­tis then chicken pox and finally I was knocked on my der­riere by glan­du­lar fever (mono — if you’re over the pond) all in the space of 6 months.   If you’ve ever had glan­du­lar fever you’ll know just how ter­ri­ble you feel and how long it takes you to recover.

Dur­ing this time books became my best friend.  I slept a lot and my atten­tion span was very lim­ited when I was actu­ally awake! Prior to glan­du­lar fever I’d read a lot of romance books but I was in no mood to read happy ever after sto­ries when I was so mis­er­able.  So I ven­tured out of my nor­mal genre and that changed my read­ing pat­terns forever.

It was dur­ing my recov­ery I found a book, A is for Alibi, by Sue Grafton which fea­tured her pro­ta­gan­ist Kin­sey Millhone.

It’s many years since I picked up that first book and I’ve fol­lowed Kin­sey through a series of adven­tures.  The first book is set in 1983 and, even though I’ve aged, Kin­sey is still stuck in the ‘80s.  I can relate to that.

Kin­sey is a P.I. in Santa Teresa, a fic­tional sub­urb of Los Ange­les.  She was orphaned by a car crash and grew up with her spin­ster aunt.  She has no fond­ness of fam­ily apart from her late aunt and her love life is unevent­ful although she does have 2 divorces under her belt.  There are no thrills in Kinsey’s life — she works hard, lives mod­estly, has few friends and never irons her clothes (another thing I can relate to!).   A very sober hero­ine indeed but she untan­gles the webs of other people’s lives with flair.  She’ old school.  And I like that.

Kin­sey has pro­gressed along in a fur­ther 20 books.  I haven’t read the lat­est book but I’m look­ing for­ward to catch­ing up with her again soon.