L is for Louis and Lestat, two Gentlemen Vampires 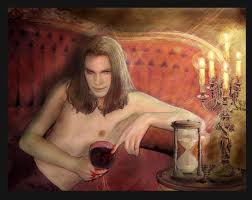 “I’m Gen­tle­man Death in silk and lace, come to put out the can­dles. The canker in the rose.” ~Lestat~ (Anne Rice)

I thought since we’re approach­ing the night on Octo­ber 31 where the crea­tures of the night, cel­e­brate the moon­light, I’ll tell you about two of those crea­tures, their names are Louis and Lestat, and they are vam­pires. We’re first intro­duced to to them in the book, “Inter­view with the Vam­pire” writ­ten by Anne Rice. A weary and anguished vam­pire named “Louis” is telling his story to a char­ac­ter only known as “the boy.“The story begins  in the late 17th c. on a plan­ta­tion in New Orleans, Louis (the plan­ta­tion owner)  is grief-stricken over the death of his brother and is wish­ing for death to claim him, which is exactly what hap­pens. He is approached by a gen­tle­man vam­pire named, Lestat, who offers him the chance to escape the pain and leave the plan­ta­tion behind by turn­ing him into a fel­low vampire.

At first, Louis hes­i­tates, but is con­vinced by Lestat who promises him an immor­tal life full of adven­ture, riches and plea­sure. Louis, who retains his com­pas­sion and empa­thy for humans is repulsed and hor­ri­fied by the drink­ing of human blood, which Lestat enjoys and thrives on. Instead, Louis chooses to live off the blood of ani­mals. Louis and Lestat are forced to flee one night as they dis­cover the plan­ta­tions slaves are plan­ning a revolt against the two. Before, they leave though, Louis and Lestat set the plan­ta­tion on fire and kill all of the slaves for fear of the news being spread of what they truly are. Run­ning through the night, they decide to become mem­bers of the high-class soci­ety in New Orleans.

“…And what con­sti­tutes evil, real evil is the tak­ing of a sin­gle human life. Whether a man would die tomor­row or the day after or eventually…it doesn’t mat­ter. Because if God does not exist, then life…every sec­ond of it…is all we have.” ~Louis (Anne Rice)

Louis slowly comes to real­ize in order to stay strong and exist as a true vam­pire, he too must start drink­ing human blood. Unlike Lestat, Louis never finds plea­sure in killing his vic­tims and con­tin­u­ally berates Lestat for his sav­agery and joy when he kills. One night, Louis sees a girl about five years old suf­fer­ing from the plague lay­ing next to the body of her dead mother. Lestat, sens­ing that Louis is become more dis­tant from him and might leave him, turns this lit­tle girl into a vam­pire to become a “daugh­ter.” for them. Louis who gen­uinely cares for the lit­tle girl they now call “Clau­dia” knows he can­not aban­don her and stays with Louis. Anne Rice, takes us through  macabre turns and twists as we’re brought into their world and become part of their “family.” 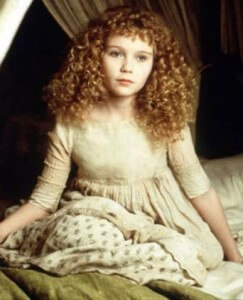 “Clau­dia was mys­tery. It was not pos­si­ble to know what she knew or did not know. And to watch her kill was chill­ing.” (“Inter­view with the Vam­pire” ~Anne Rice~)

Before this book, “Drac­ula,” (whom I adore) was the basis for all vam­pires in books and movies. We saw glimpses of his “human” side with a fas­ci­na­tion and blood lust for human women, but we never really get to know him. I had never seen the inter­nal strug­gles before in a vam­pire that Louis demon­strates. I love the wit and beauty of Lestat and am fas­ci­nated with the form­ing of their fam­ily with a lit­tle girl vam­pire. After read­ing this book, I was, well still am con­vinced there IS a soci­ety of vam­pires liv­ing in New Orleans with all the proper vam­pire eti­quette and harsh glamor. There are three more books in this series known as “The Vam­pire Chron­i­cles.” In the fol­low­ing book, we get to see Lestat’s side of the story whereas this first book focuses mainly on Louis’ view. I loved the sec­ond book, but was dis­ap­pointed with the last two books,  because I felt they were rehash­ing mate­r­ial I’ve already read.

There have been movies and even a graphic novel based on “The Vam­pire Chron­i­cles.” I was also dis­ap­pointed with the movie ver­sion of “Inter­view with the Vam­pire” star­ring Tom Cruise, Brad Pitt and Kirsten Dunst. I didnt’ feel that Cruise was able to flesh out (no pun intended) the bril­liance and depth of “Lestat”. I felt that Pitt did a decent job as “Louis” with his sor­row and remorse. Rumor has it that the actor Robert Downey Jr. will be play­ing “Lestat” based on the sec­ond novel in this series. This I look for­ward to as I think Downey is not only a bril­liant actor but has also in his own way lived the deca­dent life-style of “Lestat.” Even if you’re not a fan of vam­pires, I feel that at least the first two books of this series is def­i­nitely worth read­ing for how well Rice draws in the reader and makes one feel, well, almost undead. I don’t plan on becom­ing a vam­pire in the near future, so I’ll set­tle by get­ting into the minds and bod­ies of one through these books.